It’s been a long year. First the left hip blew up, and I could no longer tie my shoe. The cybernetic replacement part was installed without incident. I was just getting back to walking again and tieing my shoe, when the achilles broke from the changes in the reconstituted leg, resulting in three more months in the blue chair with casts and boots and a little cart to zoom around on. Not that driving a scooter is compensation for otherwise inactivity.

At the end of January the medical community allowed that I could hobble in the big black boot for the last four weeks of waiting for the tendon to knit back together again.

I drove my wife to a rendezvous with friends in Santa Monica, CA and went to a Subway sandwich shop for dinner to wait to take her home. That’s where the witch appeared.

As I sat eating, a thick triangle of spotless, pressed black fabric flowed past me, almost touching the floor it did with black shoe tips peeking out. The very first thought I had was, “witch”. Margret Hamilton’s spirit, certainly. It was nearby Hollywood, after all.

Behind me am older woman was ordering sandwiches for her and her husband. The black figure began: “I eat in Subways all across Southern California…I know how sandwiches are supposed to be made…only a few get it right…do this…do that…okay then, you will be reported to Subway corporate tomorrow…” Lastly: “You will be reported to corporate tomorrow morning.”

The other woman came by my table on her way out. We rolled our eyes at each other.

The evil witch blew past and out the door. 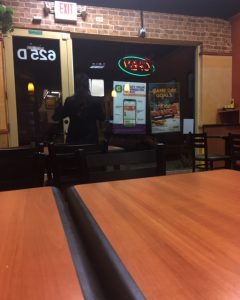 I consoled the man behind the counter and the brand new helper who had waited on me, “that was your entertainment for the evening.”

I hobbled out and down the street with my little Olympus EPL7 PEN camera with a 50mm equivalent lens set for night shooting. For you photographers: it was aperture priority, auto ISO with a 1600 maximum, f2-f2.2. Most of my photographs came out ISO 1600 and 1/15s to 1/50s shutter speed. All of the photos in the story are the unedited JPG files the camera made. They could be made much better technically, but that’s not the story.

I came back to a Starbucks 100 feet down from the Subway and sat outside watching the city slow down for the evening. The bikes and electric scooters flitted by. Every-once-in-awhile somebody heading home would stop to rent one, shining their phone flashlight on the QR code sticker to start the process. Dog walkers and baby carriages stood at corners to wait for stop lights. Construction workers yelled between corners pulling new power and data cables under them.

A middle-aged man who had been earnestly talking to a middle-aged woman about her shop came up to me. “You look like somebody who is aware of things going on around you, I am looking for my son,” he began. 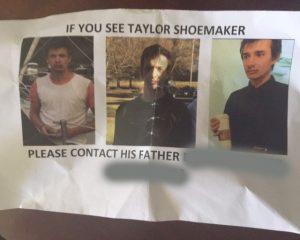 I told him I did not live in Santa Monica and was visiting from about 40 miles west. He asked me to take a flier anyway and watch out for his 25-year old son. I would do the same in his position. Such is being a parent.

I roused myself and walked across the street to take some photographs of people out at night night passing across black shadows on walls from streetlights and bare January trees. I gimped a block back-and-forth on the street again, photographing the empty shops settling in for the evening, and those still open with people coming and going.

After returning to my chair the homeless began to come by with hands-full of plastic bags and carts to find benches under overhangs in the dark recesses in front of shuttered shops to sleep upon.

Sitting in my chair at Starbucks again, a new green Aston Martin DBS burbled up next to me. The engine shut off at the stop light. It restarted magnificently and grumbled away down the street when the light changed. I did not know a $400,000 car needed to have auto shutoff to save fuel. I learned something last night.

A runner in the narrow green bike lane next to the parked cars on the opposite side of the street had to move sideways, when a car making a right turn onto the street from the corner interrupted his wrong-way path. He yelled and waved at the driver about what a jerk he was, the driver that is, for almost hitting him in the dark. He looked across the street at me for corroboration of his indignation.

My wife texted me to come pick her up and I returned to my car in front of Subway to go get her.

Night colors are the best colors. Everything from the day changes and looks different. Such is the City Of Angels in the 21st century.

Here are the pictures in no particular order. 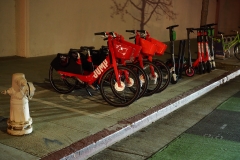 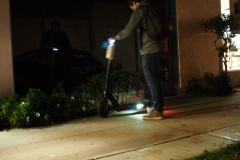 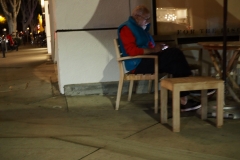 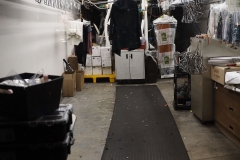 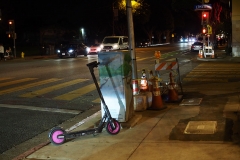 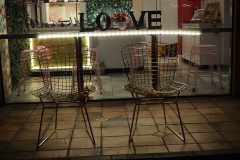 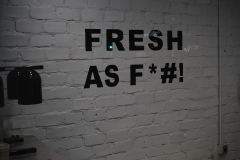 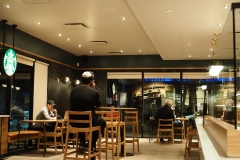 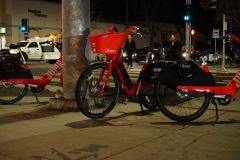 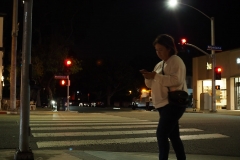 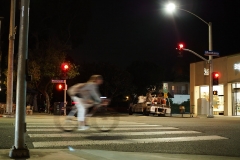 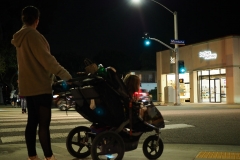 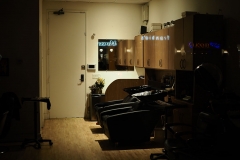 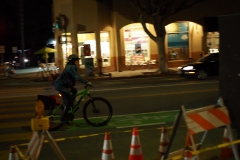 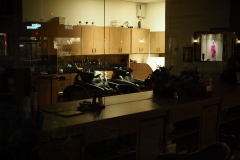 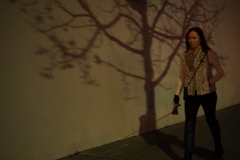 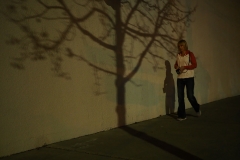 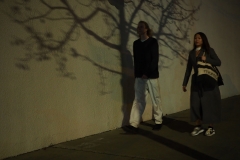 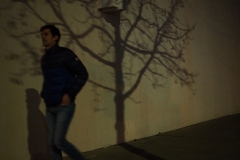 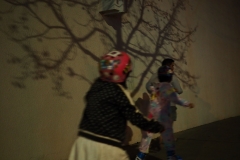