I did a noonday limping photo tour of Ventura Boulevard in Sherman Oaks on February, 20, 2020. It turned out the be the last day I had to wear the black boot over the achilles tear. Sacrificing all those goats must have worked!

Mad dogs and Englishmen…the noon sun is the best. Blue skies forever. I guess I am not a “golden hour” photographer guy.

In the interests of transparency, it is necessary to disclose that I am not an LA guy either. My town is Silicon Valley, the other being Las Vegas. I bring those eyes to Los Angeles and thus see it off kilter from the way the natives may view it.

I marvel at the Starbuck’s conversations by Insurance sales people talking about how much money they have, the issues with their children, where they go scuba diving, and where they take their problem children to in Europe. The person being sold too competes with their own stories of similar nature, while gleaming white Bentleys circle the battered vans from Utah looking for parking. The man with the yellow chalk on a stick patrols the vehicles scratching the tires. On the boulevard a car is towed by with big white, light reflectors, and a pack people with big cameras and lights on the back of the truck pointing it all at the car.

In Silicon Valley the conversations are all about technology, engineering, and which start ups got funded by which vulture capitalist. Nobody talks about how much money they have or how they spend it. People drive Teslas, ride $10,000 bicycles at lunch, and the freeways and parking lots are clogged. The homeless sleep in long lines of rusting vans and motor homes along El Camino Real in front of Stanford University, where there used to be long lines of cars for sale before the signs went up banning them.

I did live in Palms back in 1977, a part of Culver City, which is part of LA. It’s all very incestuous that way. I remember traffic jams on The 405 in the thick yellow smog that completely obscured all the cars except the one in front and the one behind. Coming from the back and beyond of the Great Basin, I was put off by the constant din and bright yellow glow all night long. I remember the old gray MGM studios with the restored 1957 and 1958 two door Thunderbird convertibles all in a row across the street from the roaring lion movie house. I peeped through the fence at the back lot, but never saw any lions.

There were wandering Hari Krishnas who lived near me in houses with huge piles of rotting compost in front of them. They had a festival with an elephant that summer.

There was a car wash next to the Thunderbirds across from the studio. I swear it was the same one from the Richard Pryor movie of the same generic name. I always liked Big Daddy Rich with the Pointer Sisters doing backup.

I don’t remember any dinosaurs, but there may have been wooly mammoths around.

I now live in a town in Ventura County, about 40 miles west of Los Angeles on the way to Santa Barbara. The air is much cleaner now, the freeways are much worse.

I was in Sherman Oaks with my Olympus OMD M1 MkII camera and a 50mm equivalent lens waiting to drive my wife home after her lunch with a friend. I hobbled up and down the boulevard with it and took these photographs.

The black and white photos are mostly right from the camera with a little cropping and nothing else except on one or two. The color pictures are tweaked with photoshop. The camera Monochrome JPG setting was: Sharpness +1, Contrast +1, Yellow Filter, Normal Color, and Normal Gradient. I was trying for a Kodak TRX 400 film look and am very happy with how the camera made them.

Many photographers swear by the kind of street photography opportunities that are available in New York City. Los Angeles is as unique and as prolific in opportunities, they are just different, like the conversations. 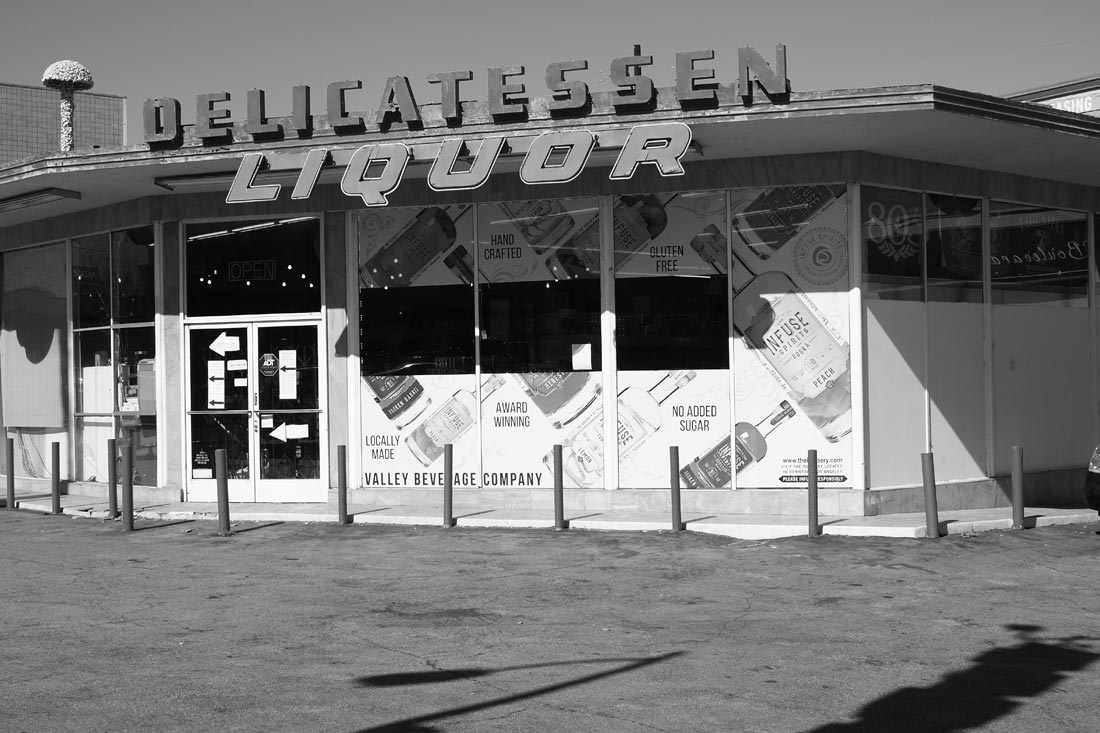