Do you have a photography obsession? You know one, or more of those things you see others do and keep trying yourself that never seem to come out as well as their’s? Maybe it is the Zone System, if you are really, really obsessed…

During my misspent photography education I came across a famous photographer by the name of Eliot Porter. He has been described as, “the Ansel Adams of color photography” by some, including Adams, and his work appealed to me as someone reading Adam’s scriptures: “The Camera”, “The Negative”, and “The Print” at the time. You can find some of Porters work here. What fascinated me in any case, was his ability to capture wonderful photographs of chaotic nature scenes containing masses of leaves, branches, flowers, and colors in sharp, beautiful images. You could see each tiny thing in his photographs, and everything resolved separately. I have always tried without much success, to duplicate some of his results in the woods of California over the years.

The trick he used was huge sheets of film and the best cameras and lenses available at the time. He was using Leica 35mm cameras initially, the best cameras and lenses in that format then, before he went “Adams” with the big view camera stuff. Don’t let anybody ever tell you that the photographer makes the image not the equipment. That’s glib and simplistic. If Adams or Porter or any other great film photographer you enjoy had used a Kodak Brownie camera with drug store developing you would have never heard of them.

Now that you are stirred up and want to refute the equipment vs. person balance in good photographs, let’s move on.

Arguing about angels dancing on the head of a pin may be the oldest continuing argument, the second oldest is how many pixels of a digital image it takes to match a certain sized piece of film. For 35mm film the number is sometimes 13mp, sometimes 24mp, and other times whatever the writer cooks up at Hogwarts. What is agreed upon is that an 8×10 piece of film is in the range of billions, not millions of pixel equivalence. Here is one person’s attempt to get to an answer by “measuring” it through hardware scanning.

My latest experiment involved photographing grass and flowers with my Olympus OMD M1 MKII using a 40-150 f2.8 Pro lens and a 12-40 f2.8 Pro lens. I even used a tripod!

It took two days to get the photos I wanted, because “physics.” Telephoto optics have good depth of field if you are shooting between a mile and infinity. Trying to get focus between 5 and 15 meters on tiny flowers with a breeze blowing is not so simple as point and autofocus. There is a great free lunch in optics. It is set just a tiny bit beyond the speed of light, if you want to drop in and enjoy it.

Here is a table for depth of field on the Olympus 40-150 lens I used. The 12-40 is better. I used the telephotos to compress the visual depth in the images because I liked that look better than just trying to get them with a normal or wide angle lens that would have been a little easier to use.

Once I had 20 MP pictures from the camera I used software to try to get the resolution and separation of the bits and pieces in them. I much prefer math and computers to chemistry, and while I love the look of film I lack the intuition and patience for developing and manipulating it.

About 15 years ago there was a software package called Genuine Fractals. Chaos Theory was all the rage then and everyone was trying to develop useful mathematics and devices using the new theories. Do you remember the Mandelbrot Set? It is an image generated by Chaos Theory math that grows and grows in a similar, non-linear pattern as you keep zooming and zooming in to it. Genuine Fractals said they used chaos math to extrapolate and interpolate between pixels in a photograph to add more pixels and more sharpness. It seemed to work reasonably well.

Today there is Artificial Intelligence photo processing offered by Topaz Labs. It uses big data sets of other photographs to rebuild digital photographs pixel-by-pixel to make them less noisy, sharper, and larger.

My Porter experiment started with the raw Olympus file that I opened in Camera Raw in Adobe Photoshop with no adjustments and ran through Topaz Denoise AI with no sharpening. The new camera and Pro lenses are not very noisy in bright daylight even at the iso400 I used to get a fast enough shutter to freeze the movement of the vegetation in the wind.

After Denoise AI I saved the photos as tiff files and put them through Topaz Gigapixel AI. I used a file size increase of between 2x and 6x in Gigapixel. My newer Macbook Pro with only quad core A5 chips and extra RAM took a very long time to process each step in the photo enhancements.

Once I had 760mp to 2gp output files from Gigapixel, I put them back into Photoshop using Photoshop Camera Raw to color tone them with film presets, usually a Kodachrome simulation or Fuji Velvia. I also tweaked the Texture, Clarity, and Dehaze sliders in Camera Raw. Then I used NIK Color Effects Pro for contrast, usually just the plain Contrast Only process, keeping the color where I wanted and applying soft contrast with the sliders. NIK Silver Effects Pro made the B&W versions. I picked whatever filter and film simulator I liked for each and applied some silver toning/cross processing look to warm the B&W up a bit.

I tried to use Topaz Sharpen AI at the end, but the huge files and overloaded laptop made it such a slow process I defaulted to Photoshop sharpening algorithms that are not nearly as good as Topaz AI, in my opinion.

It took a couple hours to process each picture due to the huge files sizes.

Are they as good as Elliot Porter’s? Nope. Are they better than just the files out of the camera run through normal processing? I think so, but they get a little robotic if you blow them up past 100%. They are also a bit too sharp and when they get exported as compressed jpgs for viewing on a screen or the web they seem to hold up okay, but I would like to see large prints of them to get a feel of how those stack up. A big, well done print might be a better test metric.

This isn’t the kind of photography that I usually gravitate to, but in the COVID times it is what’s available until I can get out and take photos I enjoy more.

Stay safe, and experiment. You might make a monster! 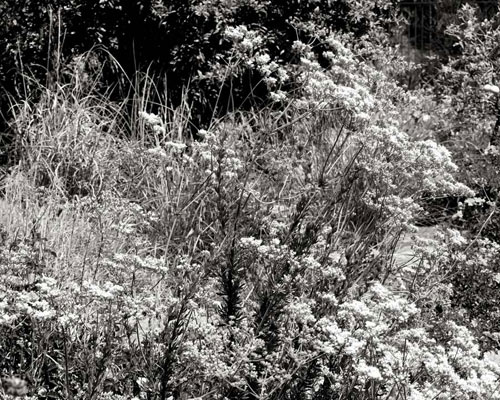