If you have ever photographed using film and studied it, you know how the chemistry goes sideways unless there is exactly the right amount of light in the exposure. Once you expose film at less than optimum light, like at night, the response becomes non-linear, that is the highlights and darks start to distort and the color in each layer of the emulsion of color films start to get “unnatural,” whatever that means. The film non-linearities are called “reciprocity failure.” Truth be told the B&W and color film failure can give great artistic effects that are hard to duplicate in digital exposures.

Your camera focal plane/image plane, the “sensor” if you prefer, is a quantum device. It has little quantum wells that collect photons at each pixel on the surface. When each well fills up with enough photons of the right wavelength it gives a predictable signal that the camera can manipulate and pass on to store in the camera memory, along with the signal from all the other pixels on the array, as a photograph or video of whatever wavelengths of electromagnetic energy you are trying to see with the camera.

Just like film, where the chemical coating needs to collect enough energy from different light frequencies it is sensitive to in order to record a grain of color in the emulsion, the semiconductor pixel in a digital camera breaks down when it does not collect enough photons and outputs a distorted signal to the camera processor that gets recorded “funny” in camera memory.

In the time that photography has been around, everybody has grown up seeing historic photographs and movies with one kind of non-linearity or another in the light recording of the scenes. It has become a cultural normal for a specific timeframe, so images from different eras of film and camera technology are as recognizable as dates many times. Mid-20th century hand toned Technicolor movies date them just like the early black and white television shows with blown out highlights date the Beatles on Ed Sullivan in 1964.

In the modern world of digital still and video cameras there exist entire industries around manipulating the information that the devices capture in any way any artist could want to. A large number of those still and movie artists also work to make the camera information look like film for all the cultural and aesthetic reasons that film brings with it. That includes all the “failures” of colors, tones, grain, and density of darks and highlights in film images and videos.

All of this is a long-winded lead in to some playing with the edges of the performance of the sensor in my Olympus M1 mkII digital camera.

I did the experiments by assuming whatever iso and f-stop I used that gave a maximum camera shutter speed of 1/8000s was pushing outside the sensor linear range and it was starting to “fail.” 1/8000s is the maximum shutter speed of the camera and I did not have any camera design specifications or direct sensor/electronics testing to show what was happening to the sensor in these experiments. They are what they are from that one assumption.

The point was to see what was happening to the images and what kind of artist effects I might produce.

The processing of the images was using the “auto” button in Adobe Camera Raw, except for the Oak tree which I played with a little more because it is my favorite. It reminds me of an African afternoon image for some reason.

Here are some of the results: 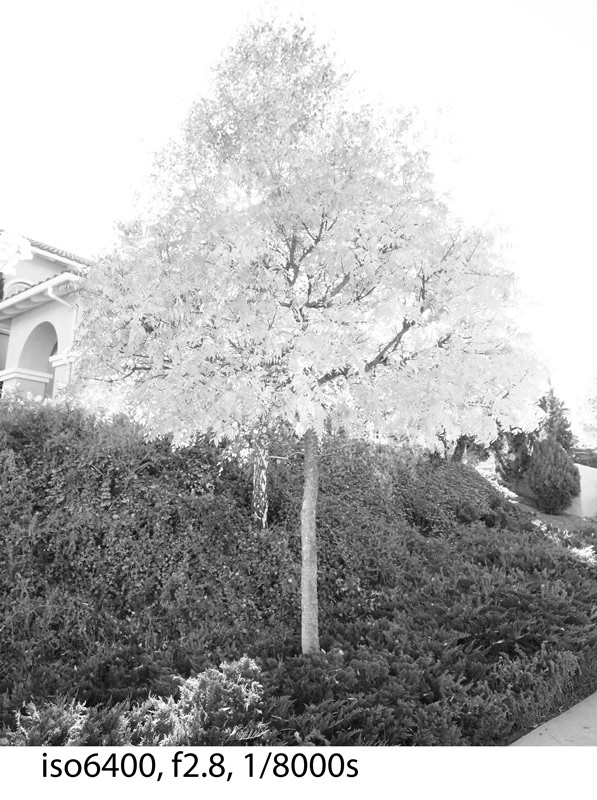