Ansel Adams said of William Eggleston’s work back midcentury 20th: “If you can’t make it good, make it red.” Robert Frank said of the same, “The colors of photography are black and white.” It was a time when color photography began to seriously threaten the black and white photography icons of the art with the prescient taunt, “color is coming.” 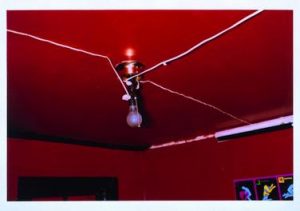 In those days landscape photography also demanded any image calling itself that have no man made elements in it whatsoever.

The art of photography did not stop in 1963 or hold the B&W fort long. Technology makes sport of disrupting old industries and institutions, jusk Kodak, IBM, Barnes & Noble, Sears, newspapers, the list is long.

The current epoch is unofficially named the “anthropocene,” according to National Geographic:

“The Anthropocene Epoch is an unofficial unit of geologic time, used to describe the most recent period in Earth’s history when human activity started to have a significant impact on the planet’s climate and ecosystems.”

Finding a pristine natural environment unaffected by humanity today usually requires special effects generated by the photographer pointing the camera to avoid contrails, roads, and human made artifacts, and all the other photographers there making the same image too. Take Iceland for instance—get in line to take the photo…

One current fad in photography, there have been many, puts a human figures in those anthropocene landscapes. The rational being demonstration of scale of nature, many times the figure happens to have a red jacket on, funny that.

The story of where magic red comes from is more interesting. Way back in the 19th Century existed a famous art rivalry between two English painters who were going about inventing landscape painting and modern art, Joseph Mallord William Turner and John Constable.

The Royal Society had big art shows with paintings hung on the walls and ceilings, like Instagram before the Internet. The good spots went to the influencers Turner and Constable at the time, and they showed up to hype their posts on the site.

At the Summer Exhibition of 1832 John Constable was winning likes with his “The Opening Of Waterloo Bridge” post. He arrived to apply daubs of paint realtime, making the painting as bright and eye catching as possible. 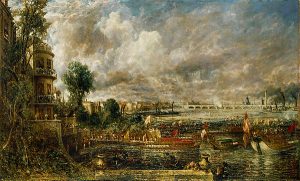 Turner freaked! His “Helvotsluys” seascape was not cutting it. Turner grabbed paint and a brush, running up to his painting to begin stabbing at it. He painted a red blob in the middle of the art, a red buoy. The art critics went wild, he had balanced the tones in the image and tied it all together, making it pop in one stroke. 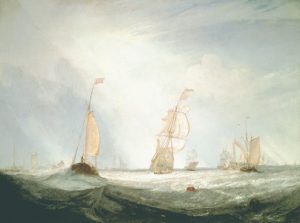 Tones matter in painting and photography. Then there is color, hue, shade to consider.

Nine tones in grayscale can create a photorealistic image, Turner had hundreds of tones in his images. His seascape was green, black, white, gray, yellow, brown and everything in between, cool colors mostly. When he threw the red blob on it, it contrasted with the cool and unified the tones, pulling the scene together around the blob.

Red isn’t magic, like many photographers use it. It only works best if it is in the right spot and balances the tones in the image. In a summer beach scene with warm tones dominating a blue jacket could be better, it all depends. A red jacket in a landscape of painted sandstone hills of Death Valley would not do anything, for example. Use the right jacket in your landscapes.

To stir up Adams again, when you put a human figure in your landscape photographs you are doing pictorialism—hush Ansel, stop screaming at me! Yes, I owe you a blog on pictorialism too.

If that figure in your landscape just stands there like a cow in a field, what’s the point of them at all? They better be doing something, they better look good, they better be in the right spot. We are programed by evolution to always notice a human figure, or even make one up out of simple shapes. Putting a person in your landscape changes the tone of the photograph completely. Tone in this case meaning balance in the attention of your viewer between the big landscape and the human model you are using. The figure is a model you have to pose properly to make the most of the image. A red speck in the middle of the yellow field does what again?